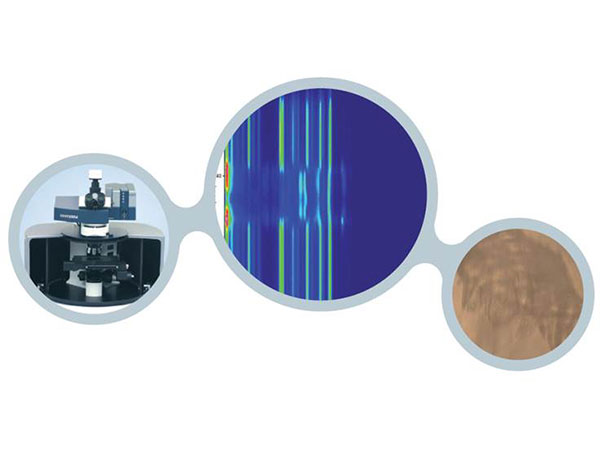 The Raman microscope is a powerful tool for the evaluation of complex samples and multilayer structures.

Raman microscopy has evolved to a common method for fast and non-destructive analysis of microscopic samples in forensic and R&D laboratories as well as for trouble shooting in the field of quality control. Samples ranging from art & archeology, materials science, biology, pharmacology to polymers and plastics can be investigated. The analysis is being performed by scanning a laser beam laterally across the sample resulting in a very high spatial resolution down to the size of less than a micron.

In addition optically transparent samples can be studied in the z-direction. Therefore confocal Raman microscopy is an extremely useful technique because it allows nondestructive sample investigation in the third dimension yielding subsurface information without the need of sample preparation such as a microtome cut. By moving the laser focus in z-direction either a complete 2D or even 3D depth profile of a structured sample like a polymer laminate can be generated or in the easiest case an inclusion or contamination inside the matrix of a sample can be identified. In this study two different application examples are given for demonstration of the usefulness of confocal Raman depth profiling. 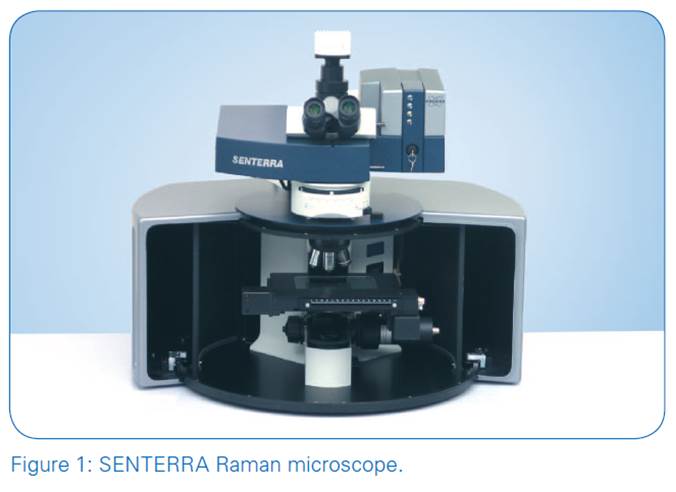 The confocal Raman microscope SENTERRA (fig. 1) was equipped with three excitation lasers (532 nm, 633 nm, 785 nm) and a computer controlled xyz stage allowing increment stepping down to 0.1μm in all directions. The confocal design of the SENTERRA Raman microscope minimizes out-of-focus contributions from unwanted spectral information by optical sectioning in z-direction with confocal pinholes.

The FlexFocusTM design of the SENTERRA allows fast switching between high throughput and confocal mode without the need of realignment of pinholes and slits. Due to the true confocal mode the SENTERRA provides a depth resolution of better than 2 μm. 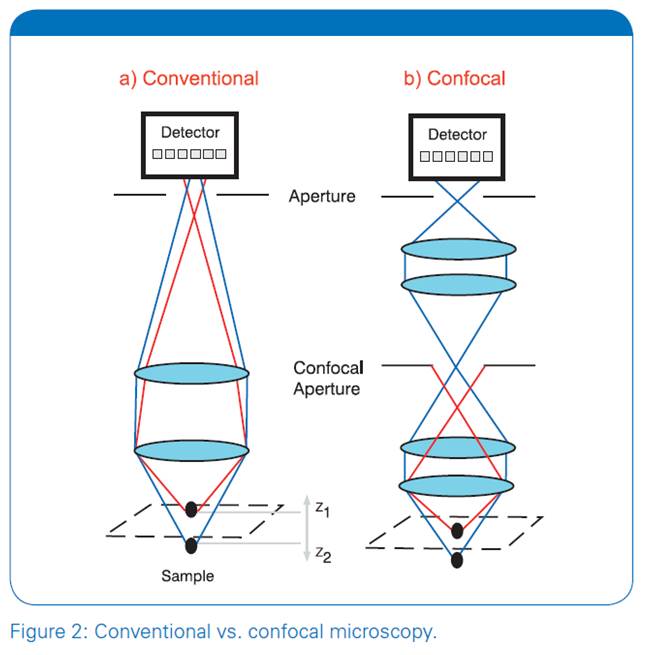 Figure 2 shows the principal difference between a conventional and a confocal optics. The detector of the conventional microscope (fig. 2a) receives light from a very broad range of different sample planes; in fact the measured spectrum will be an average spectrum of the layer between the points Z1 and Z2.

A confocal optical design can be used to reduce the sampling volume and improve the spatial resolution in order to better discriminate potential spectral differences between Z1 and Z2.The principle of confocal optical microscopy is shown in Figure 2b. In this configuration, a confocal aperture is placed in a remote image plane to reduce the sampling depth of field. In this simple example, the aperture blocks the resultant Raman light scattered from Z2 thus resulting in a spectrum exclusively from Z1. Only the in-focus and on-axis Raman light rays are recorded by the spectrograph system as the out-of-focus and off-axis light rays are blocked by the confocal aperture. The result is that confocal Raman microscopes restrict the sampling depth to a region smaller than for conventional optics. In addition, confocal measurements can also improve the rejection of stray light and reduce fluorescence interference. 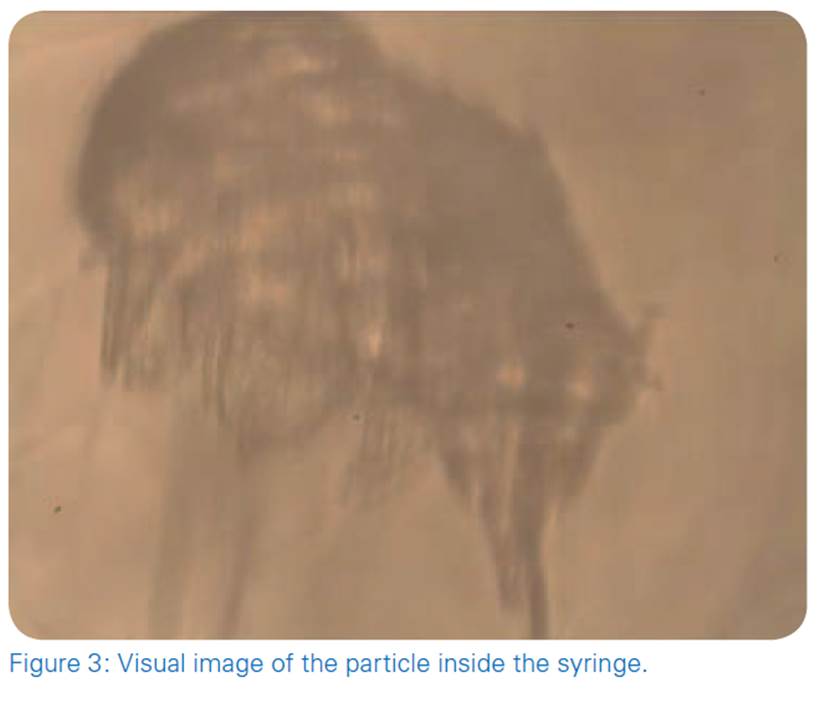 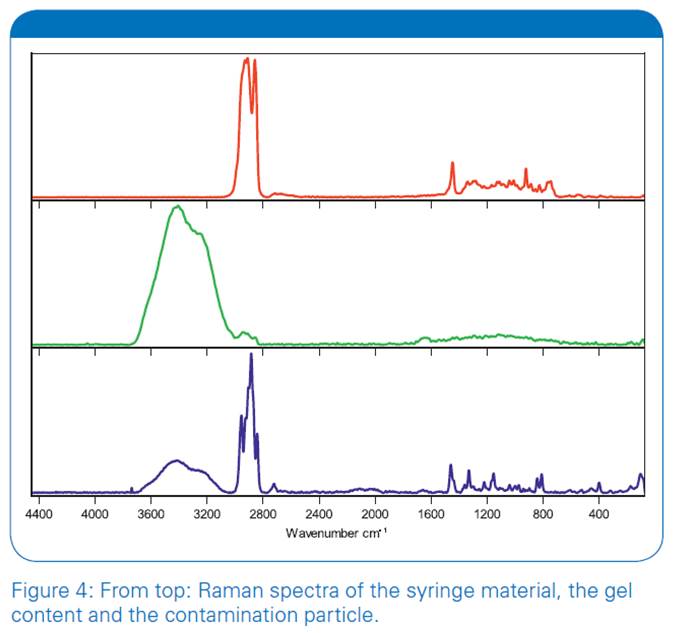 Application example: Identification of a contamination (particle) inside a liquid filled syringe.

Our first example shows the analysis of a particle located inside of a gel filled syringe. With standard techniques it is not possible to analyze such a particle without an extensive sample preparation. Normally one would have to isolate, wash and dry the particle in order to perform a reliable spectroscopic analysis. With the confocal Ramanmicroscope SENTERRA it is possible to analyze such a particle directly inside the syringe without any sample preparation. Additionally spectra of the syringe material and the gel content were collected separately. Figure 3 shows a visual image of the particle which is about 100 μm in diameter. The result spectra of the analysis are shown in figure 4. The upper red spectrum was measured directly on the surface of the syringeand can be assigned to the polymer material of the syringe tube. The spectrum of the gel content is shown in the middle of figure 4; obviously the gel consists mainly of water (broad peak around 3300 cm-1, small peak above 1600 cm-1) and an additional organic component (small peak around 2900 cm-1). Finally the spectrum of the contamination can be seen at the bottom of figure 4; a library search identifies the particle as polypropylene with a good hit-quality of 855 points (max.: 1000). Due to distinct spectral differences between the spectrum of the particle and that of the syringe-material it seems unlikely that the contamination is a fragment of the syringe, most probably it has an external origin. 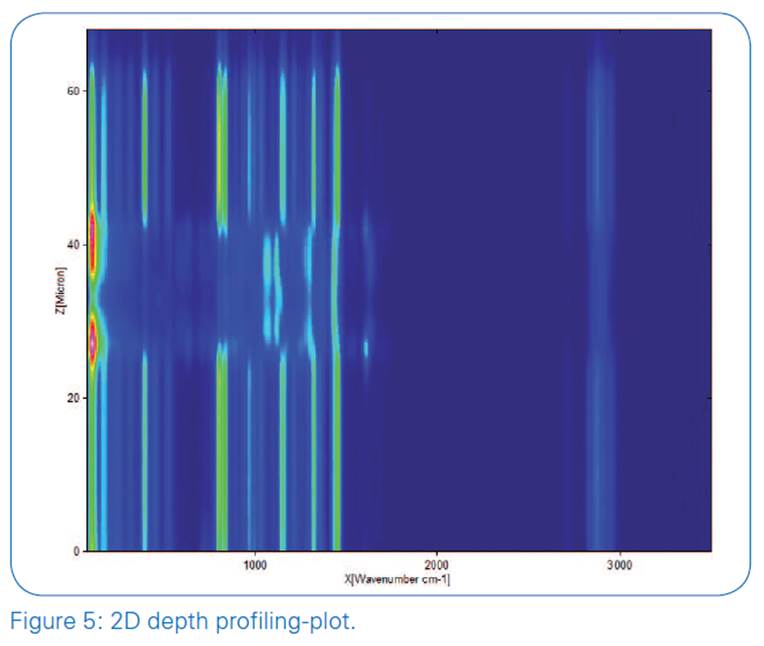 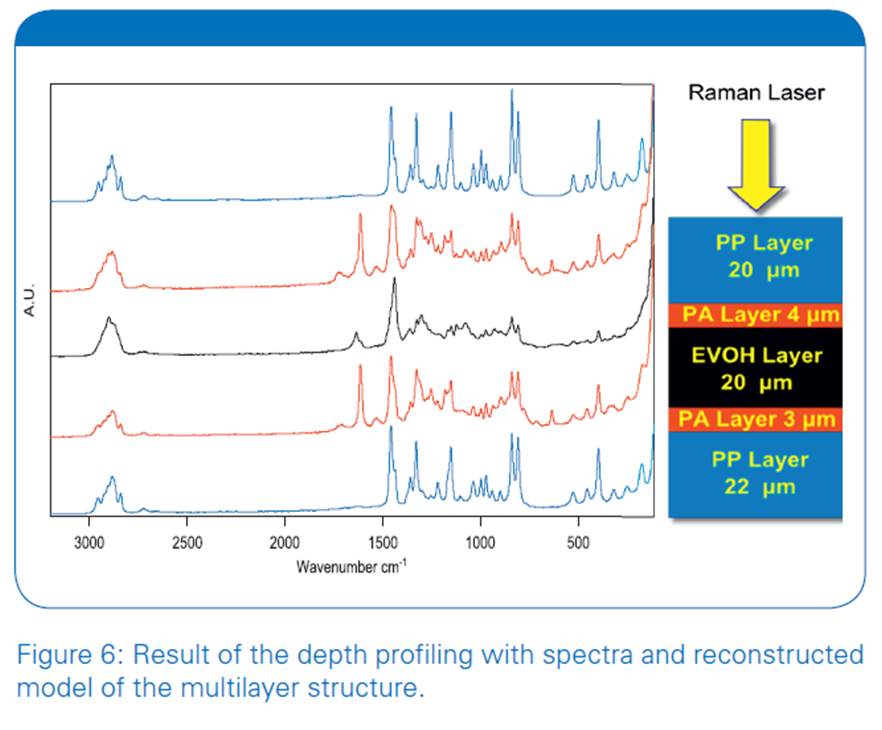 Application example: Analysis of a polymer-laminate.

In our second example we show the analysis of a thin multi-component polymer-laminate. For a detailed examination of the laminate, a depth profile was recorded with the SENTERRA Raman-microscope over a range of 68 μm with a step width of 1 μm. For optimal performance a 100x immersion oil objective was used in combination with a 785 nm laser. The result of the measurement is shown in figure 5 in a 2D plot. Especially when looking at the fingerprint region the laminar structure of the polymer foil becomes evident by the changes in the spectral patterns along the z-axis. Representative spectra of all layers are shown in figure 6, all the layers could be identified by using the library search feature of the spectroscopy software OPUS. With the library search results the laminate structure can be reconstructed as shown on the right side of figure 6: The sample consists of altogether five layers and three different materials. The outer layers are polypropylene with a thickness of about 20 μm. Both outer layers border on thin polyamide layers which are about three and four micrometers in thickness, respectively. The inner layer consists of ethylene vinyl alcohol copolymer (EVO) with a layer thickness of about 20 μm.

The SENTERRA Raman microscope is a powerful tool for the evaluation of complex samples and multilayer structures. Due to the confocal setup of the SENTERRA it is not only possible to gather high resolution surface information but also to analyze the sample along its z-axis. It is even possible to analyze a sample behind a thick transparent polymer or glass layer like for instance in a vial or a syringe without the need for any sample preparation. With the OPUS search function and extensive libraries even unknown samples can be identified.