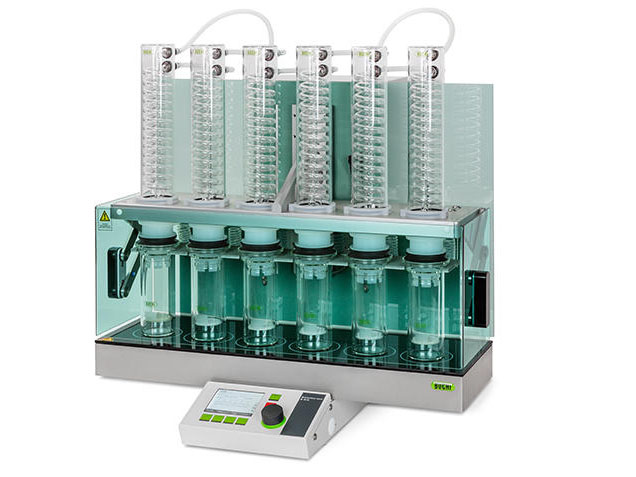 A Soxhlet extractor is a piece of laboratory apparatus[1] invented in 1879 by Franz von Soxhlet.[2] It was originally designed for the extraction of a lipid from a solid material. However, a Soxhlet extractor is not limited to the extraction of lipids. Typically, a Soxhlet extraction is only required where the desired compound has a limited solubility in a solvent, and the impurity is insoluble in that solvent. If the desired compound has a significant solubility in a solvent then a simple filtration can be used to separate the compound from the insoluble substance.
Fruit extraction in progress. The sample is placed in the thimble.

The chamber containing the solid material slowly fills with warm solvent. Some of the desired compound will then dissolve in the warm solvent. When the Soxhlet chamber is almost full, the chamber is automatically emptied by a siphon side arm, with the solvent running back down to the distillation flask. This cycle may be allowed to repeat many times, over hours or days.
During each cycle, a portion of the non-volatile compound dissolves in the solvent. After many cycles the desired compound is concentrated in the distillation flask. The advantage of this system is that instead of many portions of warm solvent being passed through the sample, just one batch of solvent is recycled.

After extraction the solvent is removed, typically by means of a rotary evaporator, yielding the extracted compound. The non-soluble portion of the extracted solid remains in the thimble, and is usually discarded.

Very similar to the Soxhlet extractor, the Kumagawa extractor has a specific design where the thimble holder/chamber is directly suspended inside the solvent flask (having a vertical large opening) above the boiling solvent. The thimble is surrounded by hot solvent vapour and maintained at a higher temperature compared to the Soxhlet extractor, thus allowing better extraction for compounds with higher melting points such as bitumen. The removable holder/chamber is fitted with a small siphon side arm and, in the same way as for Soxhlet, a vertical condenser ensures that the solvent drips back down into the chamber which is automatically emptied at every cycle.